""Only nations which liberate themselves can be free."
Malalai Joya "really is one of the bravest women in Afghanistan". She told the 300-strong audience at Conway Hall in central London last week that she has survived five assassination attempts and is still not safe with personal security guards or by wearing a burkha to cover her identity. Yet she continues to campaign against foreign occupation and fundamentalist warlords, and for women's rights and education. She believes all NATO troops must leave Afghanistan immediately. 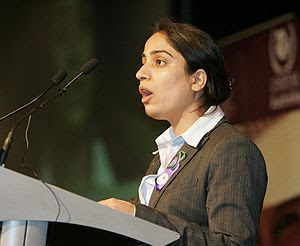 On July 16 thousands of quarry workers in Egypt went on strike in the central province of Al-Minya, in opposition to a decision by the authorities to impose a tax of E£40 on each ton of quarried rock. The tax had led some quarries to close and lay off their workers. The dispute is only one of several ongoing textile workers’ strikes since privatisation, despite the brutality with which last year’s strike at Mahalla al-Kubra was put down.
- Monday, July 27, 2009

An interview with Yasser Alwan about his work "The Liberty of Appearing - Photographs of Egyptian Working People" (Peacock Imprint, 2008, edited by Richard Peacock with an introduction by John Molyneux, Senior Art theory Lecturer, University of Portsmouth). "Yasser Alwan's subjects are sometimes alone, always in a crowd, recognisably Egyptian, resembling everybody else ... Global struggle corralled into an Arab street corner. Still life speaking to the world of how it sees itself..."(Eamonn McCann, author of War and an Irish Town). "These are wonderful photographs. They are very simple, the subjects shine out, and here is humanity without any sentimentality." (Red Saunders, photographer & founder Rock Against Racism).

"The Good War? Afghanistan in the media". Listen to columnist Seumas Milne from the Guardian newspaper (UK) speaking in a public meeting organised by Media Workers Against the War and Stop the War Coalition. (Friends Meeting House, London 13 July 2009).

Ishmahil Blagrove, a filmmaker and public speaker, speaks about his recent attempt to enter Gaza, his arrest in an Isareli prison, and the aim of the trip which was organised by 21 activists from 11 countries including former US Congresswoman Cynthia McKinney, Nobel Peace Prize Winner Mairead Maguire, in order to deliver a cargo of medical aid, toys and building supplies.

Groundhog Day in Afghanistan: "Operation Panther's Claw" in Afghanistan and the British Media.
Amy Goodman from "Democracy Now" in conversation with the journalist and film-maker John Pilger on Honduras, Iran, Gaza, health care in the US and "Obama's war" in Afghanistan-Pakistan.

The Science of (Not) Ending Global Poverty

Anger against the oppressor