"Our way of life" RAF to Look for Any Unbombed Bits of Syria DAVID Cameron has called on Britain to flatten the last remaining bumpy bits of Syria. Making his case for British airstrikes against ISIS, the prime minister told the House of Commons there was an outside lavatory 15 miles from Aleppo that still has its roof attached. He added: “It stands there, being a toilet, brazenly defying our values. If not now, when?” The prime minster then listed seven other small buildings across Syria that remain structurally sound, including a newsagent, a car wash and a fruit kiosk that could be sheltering up 20,000 ISIS maniacs. He added: “We have learned the lessons of Iraq. Too many buildings were left standing in Iraq. And it was in those buildings that ISIS was formed. “We will only bring peace to the Middle East when all the buildings have been destroyed and everyone has to stand around in the street.” Meanwhile, Cameron has not ruled out sending troops to
Post a comment
Reactions:
Read more
- November 29, 2015
The Threat is Already Inside And nine other truths about terrorism that nobody wants to hear Good arguments, and facts, by a defender of the system Note: Foreign Policy calls Hamas and Hizbullah "terrorist organizations".
Post a comment
Reactions:
Read more
- November 28, 2015
My comment on Paul Rogers's recent article "Its ambitious aim was to cause the overthrow of the 'near enemy' regimes in the Middle East and southwest Asia, replacing them with 'proper' Islamist regimes; to see Zionism destroyed..." Do you have figures and evidence of any attacks on Israel's interests? Are they of any significance? More importantly, you too either has fallen in a trap or that is just your way of working withing the frame work of defending the system, trying to make it better. You are speaking about "the same mistakes being made." They are not mistakes and only an apologist for the state terrorism of the Western regimes would call them mistakes. Occupations, invasions, support of dictators in the Middle East and outside the Middle East, imposed economic policies, support of Israel's state terrorism, support of the so-called Islamist liberals as long as they maintain the status quo of "the free market" and depe
Post a comment
Reactions:
Read more
- November 28, 2015
An e-book and interview The Ethnic Cleansing of Palestine  (e-book) My interview with Ilan Pappe Syriza's U-turn on Israel is Now Complete
Post a comment
Reactions:
Read more
- November 28, 2015
I think this incident is full of metaphor, allegory, images, parabols, etc when put into the context of occupation, ethnic cleansing, rape, plunder, and all other barbaric acts of a state. Tel Aviv, Israel: "a sex worker, who worked 12-hour shifts and slept with up to 30 men a day, hanged herself. Three hours after her body was found, the brothel went back to work."  Source: Haaretz.com, 22 August 2015.
Post a comment
Reactions:
Read more
- November 27, 2015
Isis: In a borderless world, the days when we could fight foreign wars and be safe at home may  be long gone Robert Fisk, author of The Great War for Civilization . Yes, It Is Islamic Extremism - But Why? Graham E. Fuller is a former vice-chair of the National Intelligence Council at the CIA, Adjunct Professor at Simon Fraser University, and author of numerous books on the Middle East and Islamic movements. His first novel, “Breaking Faith: A Novel of Espionage and an American’s Crisis of Conscience in Pakistan,” will be out in March 2015.
Post a comment
Reactions:
Read more
- November 27, 2015

A defender of barbarism

Atif, 14 years old. Stonemasonry worker in Shaq Al-Thüban area south of Cairo, he takes a salary that varies between 10 to 15 EGP per day.  Atif is cutting stones since he was almost 8, he was seriously injured more than once like hundreds of other children who are doing this dangerous job. Source: Everyday Egypt on Facebook
Post a comment
Reactions:
Read more
- November 21, 2015

September 11 and the Functions of the ‘War on Terror’ I wrote this article on 11 September 2006 9/11 saw thousands of innocent people killed in cold blood by an act of terrorism. Yet the impulse to retaliate has already shown us why a ‘war on terror' cannot be won. "Why would other people," asks David Kean, "not feel similar emotions and impulses when  they  are attacked, when  their  innocent people are bombed or shot in the name of somebody else's ‘justice'?" In the words of Shylock, in Shakespeare's  The Merchant of Venice , "He hath disgraced me ... laughed at my losses ... scorned my nation, and what's his reason? I am a Jew. Hath not a Jew eyes? Hath not a Jew hands, organs, dimensions, senses, affections, passions? ... If you prick us, do we not bleed? If you tickle us, do we not laugh? If you poison us, do we not die? And if you wrong us, shall we not revenge?" ( The Merchant of Venice , Act 3, Scene 1) The artic
Post a comment
Reactions:
Read more
- November 21, 2015
The Iraq Legacies and the Roots of the 'Islamic State'
Post a comment
Reactions:
Read more
- November 21, 2015
"Whenever the West is attacked and our innocents are killed, we usually wipe the memory bank. Thus, when reporters told us that the 129 dead in Paris represented the worst atrocity in France since the Second World War, they failed to mention the 1961 Paris massacre of up to 200 Algerians participating in an illegal march against France’s savage colonial war in Algeria. Most were murdered by the French police, many were tortured in the Palais des Sports and their bodies thrown into the Seine. The French only admit 40 dead. The police officer in charge was Maurice Papon, who worked for Petain’s collaborationist Vichy police in the Second World War, deporting more than a thousand Jews to their deaths."  Robert Fisk, the Independent , 17 November 2015 Read also Are We ISIS? Flag Down
Post a comment
Reactions:
Read more
- November 20, 2015
France Returns to the State of Exception Gilbert Achcar Human rights? "...  What you call the ‘predominance of human rights’ is an ideological phenomenon that certainly is of symptomatic value, but is not enough to change social structures. There are even ways of using it that hide the varieties of racism that are now developing, paradoxically by way of a ‘humanitarian’ or ‘philanthropic’ discourse that serves to keep populations or categories of individuals in the condition of recipients of help rather than as bearers of equal rights. Differences or incapacities are presented as essential properties, though they are in fact the result of historical conditions and of relations of domination." Étienne Babilbar
Post a comment
Reactions:
Read more
- November 20, 2015
Interrogation under torture was widespread. Many of the men were anally raped, using knives, broken bottles, rifle barrels, snakes and scorpions. A favourite technique was to hold a man upside down, his head in a bucket of water, while sand was rammed into his rectum with a stick. Women were gang-raped by the guards. People were mauled by dogs and electrocuted. The British devised a special tool which they used for first crushing and then ripping off testicles. They used pliers to mutilate women's breasts. They cut off inmates' ears and fingers and gouged out their eyes. They dragged people behind Land Rovers until their bodies disintegrated. Men were rolled up in barbed wire and kicked around the compound. Deny the British Empire Crimes?  No, We Ignore Them.
Post a comment
Reactions:
Read more
- November 19, 2015

" I'm so sick of seeing the endless debate about "if you care about Paris you don't care about Beirut/Metrojet/now Nigeria" et cetera. The reality is this: Paris, like any American city, is in the first-world protected zone.  Ever since WWII the overall consensus strategy on the part of everyone in the ruling elite of the global North, from the most far-right capitalist to the most left-wing Politb uro member, has been to export conflict from the North into all kinds of global peripheries. We EXPECT to see violence in Beirut because we put it there. Our security states protect us from the blowback of whatever neocolonialist policies we might care to pursue on those peripheries. So what if we fail at nation-building? We'll never have to "fight them over here," not really. ( The attached map , although badly out of date, expresses some of this concept.) So of course when there's a terrorist attack in a core northern city like Paris or New York
Post a comment
Reactions:
Read more
- November 19, 2015
Beware the Extremists
Post a comment
Reactions:
Read more
- November 18, 2015
"Aren't Arabs terrified? Aren't Iraqis terrified? Don't Arab and Iraqi women weep when their children die?  "What fools we are to live in a generation for which war is a computer game for our children and just an interesting little Channel 4 news item." Tony Benn, 1998
Post a comment
Reactions:
Read more
- November 18, 2015 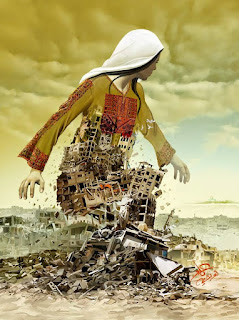